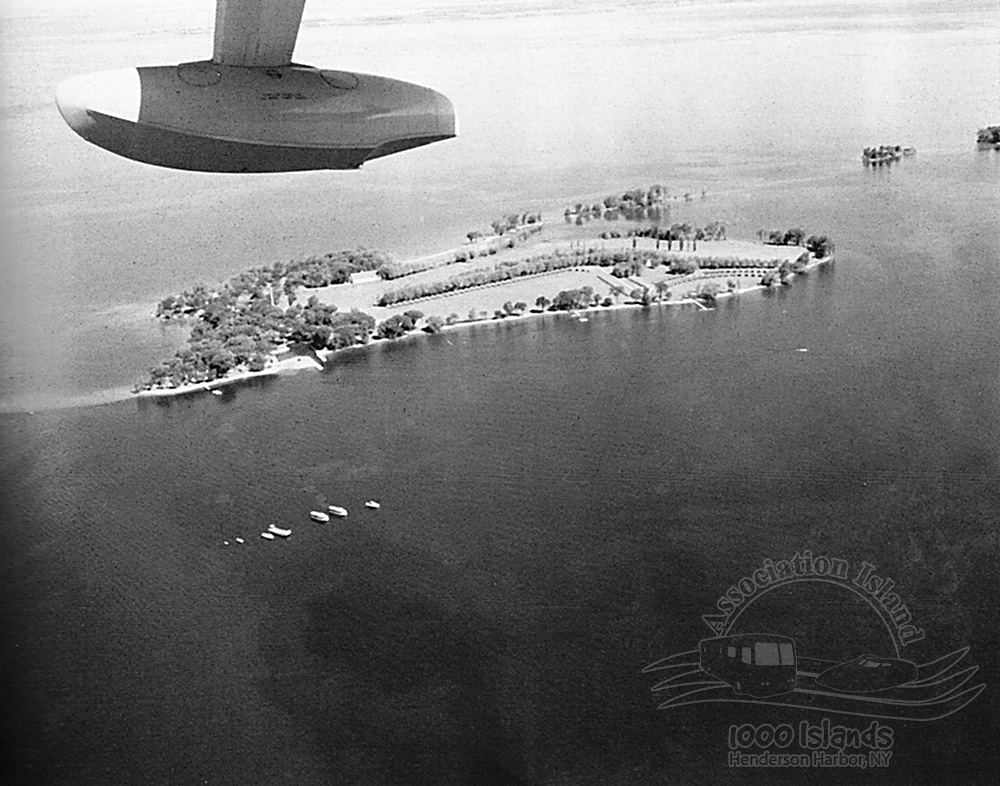 In this view of the island from the 1950’s we can see several interesting changes that have happened here over the years. First off, the is indeed an island, with no connection to the mainland. The island was dependent on a fleet of boats to ferry everything and everyone from Henderson Harbor, some of which can be seen lined up for this photograph. Missing too, is our expansive marina, which wasn’t excavated until the early 2000’s.

If you would like to know more about the colorful history of the island you can read Association Island by Timothy W. Lake, available at the Island House store and at http://www.timlakebooks.com/.  You can also see the 30 minute video documentary every Saturday at 5pm at the Black Catte Activities Center.

In summer 1954 I was part of sixteen singers from Yale and Vassar–Yale’s Baker’s Dozen and the Vassar Night Owls–who provided entertainment on the Island for the GE executives who came for three-day “incentive vacations” twice a week for two months. We performed in the Black Catte–a nightclub with a stage–performing a Jerome Kern medley, Franz Lehar’s “Merry Widow,” and Kurt Weill’s “Down in the Valley,” all in costume, in sequence on the three nights, preceded by cocktail hour performances by our two groups of songs from their own repertoire. On the seventh day we enjoyed the island activities ourselves. I have a recording of the Baker’s Dozen made by obliging GE engineers on location, and a nice recording of “Down in the Valley” in a live performance by both groups.

The visitors would be greeted at the dock by a small brass band and us collegiate songsters with this fanfare:

Association Island–Your Island welcomes you;
If your stay is happy–Then we’re happy too!
Softball, golf, and swimming…, sailing, swimming, skeet;
This island has all you’ll ever need
to make your stay complete!
[modulate to new key, singing “doobey-doo” in harmony]

Association Island–surprises are in store:
Breakfast, lunch, and dinner,..all you want and more;
And in the cool of evening, there’s harmony in song;
The friendships you make…on this old lake..
Will last…. you…. all……….. life long!

The climax to this noisy greeting was the roar of the GE biplane, splashing down at the dock for the dramatic appearance of CEO Ralph J. Cordiner, striding out to shake the hand of every guest. As kids say today, “Like Wow!”

Ten years later I spent a week on the Island at the Y’s Mens Club Convention as a delegate from Buffalo, with a more sober focus and no noisy fanfare. I believe the Island’s name refers to its then-owner the Young Men’s Christian Association.

What a nice historical perspective. Thanks for sharing!